Pregnancy is known to unveil some diseases in the mother and may exaggerate the pathology or modify it which if detected early can help optimise outcomes.

Prepregnancy planning and evaluation is important. Know thyself and thy body is the mantra.

Mrs RT (28Y) Reported with a threatened miscarriage at 12 weeks of pregnancy. This was her second time and the first pregnancy had ended in a missed abortion at 11 weeks ( 2 and a half months) duration. This time she was taking care with a local doctor and was referred to me for specialized care.

Thorough evaluation revealed that she had thyroiditis which is an autoimmune disease wherein the thyroid gland functioning is abnormal and is responsible for irregular menstruation and miscarriages and other adverse pregnancy outcomes.

Appropriate medications were given to her for the same and also for pregnancy support. In addition, she was identified to be moderately anaemic before conception which too was corrected with dietary, medical and supportive treatments.  She was thoroughly evaluated for congenital anomalies in the foetus, structural abnormalities in her womb, placentation and placental perfusion, possibilities of genetic diseases and infections.

She was diagnosed to have asymptomatic urinary tract infections which was treated as per the culture report and was offered prophylaxis against bacterial vaginosis. Her screens predicted a possibility of fetal growth restriction, placental separation and preterm delivery and necessary measures such as nutritional analysis and guidance, uterine quiescence medications were started. Her thyroid supplements maintained a normal status and she was counseled about early warning signs, self-monitoring and to report in case of any problems.

Her regular follow-ups continued then on regularly as planned and scheduled. She was screened for structural anomalies, cervical shortening, Hypertensive disorders of pregnancy and pregnancy-related diabetes as per our scheduled protocol.

At 23 weeks of pregnancy, she reported with changed vaginal discharge and low backache and was diagnosed to have threatened early preterm delivery for which she was admitted on an emergency basis.

Immediate ultrasound examinations revealed that the cervix ( opening of the womb ) had started to open from within. After 72 hours of stabilization and antibiotic cover, she was taken for emergency encirclage. The procedure was difficult and replete with complications but could be performed with safety with due counseling of RT and her family. Designated treatments, surveillance and on and off hospitalizations continued and she was admitted with rise in blood pressure at 33 weeks for observation. It was mild rise in blood pressure with no proteinuria but with her background clinical profile she was hospitalised for observation. After 3 days of hospitalisation, her membranes broke and we decided to take her for Caesarean delivery as the baby was presenting by breech being premature. Caesarean section was performed and her amniotic fluid was found to be turbid but cultures did not reveal any microbial growth.

A 1350 grams baby girl was delivered between 33 – 34 weeks and needed 8 days NICU stay for support and treatment for prevention. Today, after 1 and a half years after the delivery, both my precious jewels, the mother and the baby are healthy. 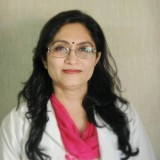 Get updates in your Inbox